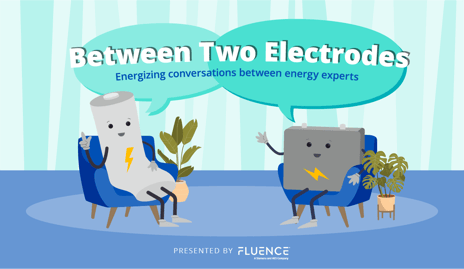 Between Two Electrodes is an educational series for energy professionals produced by Fluence with industry subject matter experts. The content will focus on educational topics that help our viewers and readers make better, more informed decisions on complex energy topics.

The energy storage industry is growing at an unprecedented rate with larger installations setting records year after year. Alongside this massive growth has been exciting innovations in storage product technology, and growing attention toward ensuring safety is central to the design, installation, and operation of these products.

The purpose of codes and standards in any industry is, respectively, to provide minimum criteria for ensuring the safety of life and property, and to establish industry best practices. Codes are written into regional laws and are therefore required, while standards are written by reputable industry organizations, such as Underwriters Laboratories (UL) and International Electrotechnical Commission (IEC), and are only required if referenced in code.

In North America, the newest standards that govern energy storage systems are:

Globally, the IEC 62933 series has similar safety requirements as UL 9540, with IEC 62933-5-2:2020 mentioning the need for large-scale fire testing for evaluating thermal runaway of Li-based battery systems and referencing UL 9540A as an example test method. Of course, there are many additional codes and standards that apply, such as UL 1973, but these are the ones that pertain specifically to the safety and testing of battery-based energy storage systems and have only been introduced in the last few years.

For a new and fast changing industry like energy storage, these codes and standards need to be revised regularly to accommodate evolving technology advances and avoid lagging behind industry innovations.

UL 9540 is a system level certification for energy storage systems used to evaluate and certify the safety of these products. UL 9540A compliments UL 9540 by providing the test method for evaluating thermal runaway and fire propagation in energy storage systems. Thermal runaway, as defined in NFPA 855, is when a battery cell increases in temperature at a faster rate than it can dissipate heat and begins to self-heat, causing an uncontrollable increase in temperature which can, but doesn’t always, lead to off-gassing, fire, and/or explosion. UL 9540A provides a test method for evaluating what happens when an energy storage system goes into thermal runaway but does not define a pass or fail criteria – the test results must be evaluated to determine if the system performed as designed and expected. The goal of UL 9540A testing is to better understand what happens when a battery goes into thermal runaway. When conducting UL 9540A fire testing for an energy storage system, there are four levels of testing that can be done:

In each of these test setups, battery cells are intentionally heated to force thermal runaway and observe the resulting event. Does the battery eventually ignite into a fire? Is there enough off-gassing to cause an explosion? Will the fire burnout on its own? For the module test setup, where there is more than one battery cell present, the intent is also to see if thermal runaway and/or fire propagates to neighboring cells. For the unit and installation test setups, additional units or fire barriers are placed alongside the test unit to see if thermal runaway or fire propagates to neighboring units.

What does it mean if a product is UL 9540 certified?

UL 9540 certification means that a nationally recognized testing laboratory (NRTL) has independently evaluated and verified a product meets the requirements set forth in UL 9540 but does not necessarily mean UL 9540A testing has been conducted unless specified.

What is a “large-scale” fire test and how does that differ from UL 9540A testing?

While UL 9540A is a critical starting point for battery storage system testing and provides very useful information, it is still limited in scope since the parameters of the test setup may not create the conditions for a fire to ignite. Depending on the type of battery chemistry used, it may be necessary to deviate from the prescribed method in UL 9540A to create a fire in the test enclosure. A large-scale fire test aims to fulfill those limitations of UL 9540A and provide additional data on what might happen if a system were to fail at a project site as well as ensure the safety features designed into the system function as intended. The definition of a large-scale fire test per NFPA 855 is the testing of a representative energy storage system that induces a significant fire into the device under test and evaluates whether the fire will spread to adjacent energy storage system units, surrounding equipment, or through an adjacent fire-resistance-rated barrier.

While the details of how a large-scale fire test should be performed are not yet clearly defined in the industry, Fluence has taken a lead to define its own large-scale fire test to create an extreme event in order to demonstrate the behavior of an enclosure fire in a setup that resembles a real energy storage installation.

How did Fluence conduct its large-scale fire test and what were the results? Fluence designed a large-scale fire test that went above and beyond the requirements of UL 9540A testing by creating a significantly larger thermal runaway event than UL 9540A requires in order to force a fire to occur. The test was conducted with four fully populated Gen 6 Cube enclosures with the test Cube in the center and the other Cubes adjacent, behind, and in front. Inside the test Cube, which was populated with fully charged modules, Fluence attached heaters to the outside of one battery module (heating over 26 cells versus the single cell heated in a UL 9540A test), to create an extreme thermal runaway condition and observe the resulting event. Once the heated module entered thermal runaway, it was very slow to propagate to neighboring battery modules within the same enclosure and slow for a fire to initiate. Off gassing was detected within the test Cube but did not cause an explosion. At the end of the test, the fire was contained to the initiating unit and thermal runaway did not propagate to the neighboring Cubes. 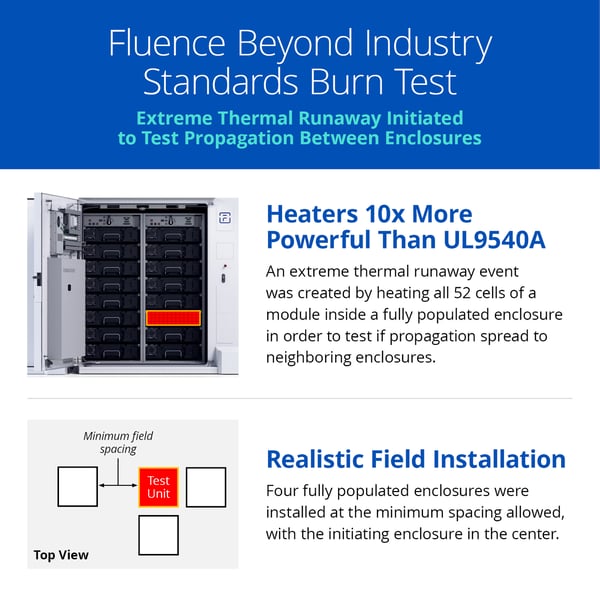 What is a “good” result from a fire test? A “good” test is one where the behavior of the battery system in a thermal event can be characterized and used to develop robust emergency response procedures. In the words of American Fire Technologies General Manager Paul Hayes, “all data is good data.” An ideal fire test result is one where the event is contained to a single enclosure and does not propagate to neighboring enclosures, and any fire that ignites inside the test enclosure burns itself out without human intervention.

What has been learned from large-scale fire testing?

With each fire test conducted, more is learned about how a battery system thermal event may unfold in real life circumstances. The more that is understood about how each product design behaves, the better we can prepare first responders on how to respond to a thermal event, if one occurs.

We have learned that the outcome from a fire can vary depending on the type of battery, and for the systems we have tested the fires unfold very slowly and can also stop on their own without any human interaction. Without being able to see inside an enclosure, it may be difficult to know when a fire inside is done and when it is safe for a first responder to open the enclosure. If we assume that the normal data collection systems designed into the product are no longer functioning, then other tools will be needed to monitor what is happening inside the enclosure. InfraRed (IR) cameras are one such tool and can provide valuable information on changes in temperature occurring inside an enclosure.

Being Proactive About Safety

How are battery energy storage products designed with safety in mind? There are many safety features that can be designed directly into a battery system to prevent and/or minimize the effects of a thermal event. Some examples include sensors and alarms that will automatically shut down a system if an issue is detected. In the unlikely event that off-gas builds enough pressure inside an enclosure, deflagration panels are designed to direct the energy of an explosion away from neighboring units and personnel.

How can developers be proactive in engaging local authority having jurisdiction (AHJs) regarding the safety of energy storage systems being installed in their jurisdiction? First and foremost, every energy storage project should have a safety plan and an emergency response plan specific to that site which is best created in collaboration with the local fire department. During the development of the project, communicate early and often with local AHJs to ensure all parties agree on the best emergency response plan for that site. Prepare product safety documentation such as test reports and an explanation of built-in safety features. During construction and after installation is complete, organize recurring safety training on site to keep information current and to train new personnel.

What are best practices for asset managers over the life of a project?

Over the life of an asset, it is very likely that the people involved in operating and maintaining that asset will change. Asset managers should stay up to date on the emergency response plan for their site and if new employees, contractors, or first responders may need to be trained. The emergency response plan should be reviewed to verify all information is current.

Regular O&M inspections are also an important practice for ensuring energy storage systems are operating safely. Proactive inspections help to identify potential issues early and provide a baseline for better understanding the system operation and knowing which component parts may need to be replaced before they cause a system shutdown.

Any statements that are not historical facts and that express, or involve discussions as to, Fluence’s expectations, beliefs, plans, objectives, assumptions, future events or the performance or safety of new technology and products (often, but not always, indicated through the use of words or phrases such as “will likely result,” “are expected to,” “will continue,” “is anticipated,” “estimated,” “intends,” “plans,” “believes” and “projects”) may be forward-looking and may involve estimates and uncertainties which could cause Fluence’s actual results to differ materially from those expressed in the forward-looking statements. Such forward-looking statements are subject to a number of assumptions, risks, and uncertainties, including those described under the heading “Risk Factors” in Fluence’s most recent Annual Report on Form 10-K and in other filings Fluence makes with the SEC. New factors emerge from time to time, and it is not possible for us to predict all such factors. Further, we cannot assess the impact of each such factor on our results of operations or the extent to which any factor, or combination of factors, may cause actual results to differ materially from those contained in any forward-looking statements. Any forward-looking statements speak only as of the date of the post, blog, or other disclosure, and are based on information available to Fluence as of the date of such publication and Fluence does not undertake to update or revise any of the forward-looking statements, whether as a result of new information, future events or otherwise.

Eli Bashevkin is a Principal Engineer and Jennifer Alfsen is a Product Marketing Manager at Fluence.