Wrestling with that question often leads to the energy storage equivalent of “range anxiety” in electric vehicles—a concern that the energy stored will run out before the end of a peak, raising system costs and potentially risking system reliability. But here’s the thing: solving that problem doesn’t have to be as daunting as it seems.

The challenge: there are many energy storage benefits, but it doesn't create electrons

In short, an energy storage system provides more value per megawatt to the grid than a natural gas peaker.

BUT, the one thing energy storage cannot do, by definition, is provide limitless energy. Without being able to recharge, the battery runs out of energy at some point, which seems understandably concerning.

In fact, current proposals to support baseload generation play on this similar fear—that 24/7 limitless energy is required to maintain grid stability—when in fact generators regularly turn up and down, or shut off entirely, over the course of the day to match changes in demand. For instance, in the PJM interconnection region (which includes much of the mid-Atlantic US), the minimum electricity load was 68 gigawatts (GW) and the peak electricity load was 132 GW during the week of July 22nd – July 28th, 2018. This 64 GW swing comes from a lot of power plants turning up, ramping down, and shutting off on an hour-to-hour basis. In other words, varying energy output of individual plants is an embedded part of our electricity system today.

While comfortable with managing a variable load profile, system planners are not yet used to having to think about generators being energy-limited. The question of “how valuable is 2 hours, or 4 hours, or 6 hours of reliable daily capacity” is a difficult one to answer because it’s not often investigated. But it’s an important question with energy storage, as the cost of energy storage is highly dependent on the number of hours of duration needed.

The conventional approach: procuring based on peaker capability, not system need

A common approach today is to compare the duration of energy storage to the dispatch pattern of existing peakers. As a general rule, peakers typically run 10% or less of the year, and many never run for longer than 4 hours at a time. If a peaker never runs for more than 4 hours, then logically an energy storage system with 4 hours of energy could do the exact same job.

Though true, this is an overly simplified analysis, and underestimates the amount of energy storage that the system will benefit from. Peaker dispatch patterns are inevitably tied to their energy capabilities, and many peakers run for long durations even though the system may not need them to. When viewed from a system level, rather than replacing an individual peaker, energy storage is better thought of as a very cost-effective way to shave the peak.

Paul Denholm and Robert Margolis at NREL have shown how this works in their seminal research. Studying 2011 data from CAISO, they looked at how much 4-hour duration energy storage could shave the system net peak (total generation minus variable renewable generation) on the highest demand day: 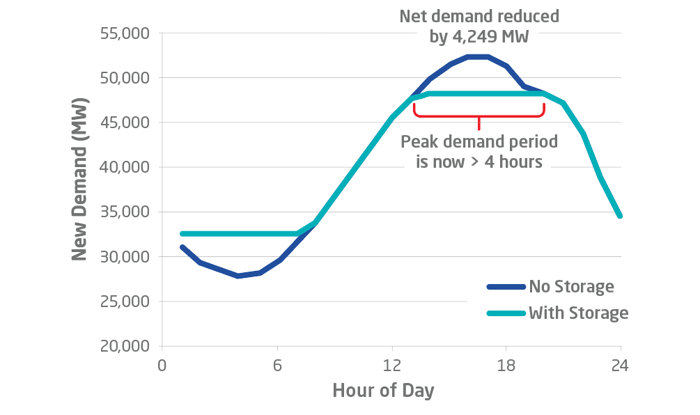 Notice what this implies: you can embed over 4 GW of energy storage with a duration of 4 hours and directly reduce the peak remaining for fossil fuel peakers. 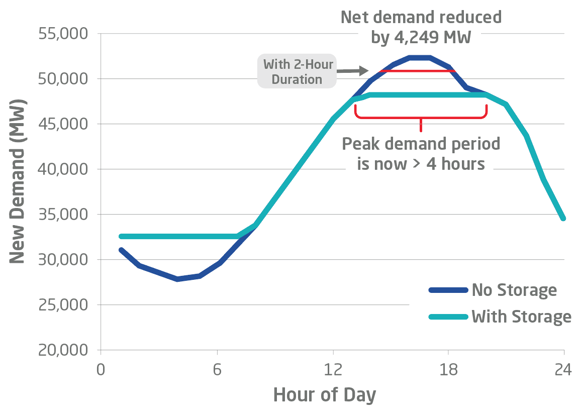 Denholm and Margolis did this very analysis, looking at the ability of 2-, 4-, 6-, and 8-hour energy storage to directly reduce the CAISO peak (equivalent to being able to achieve 100% capacity value on the chart below): 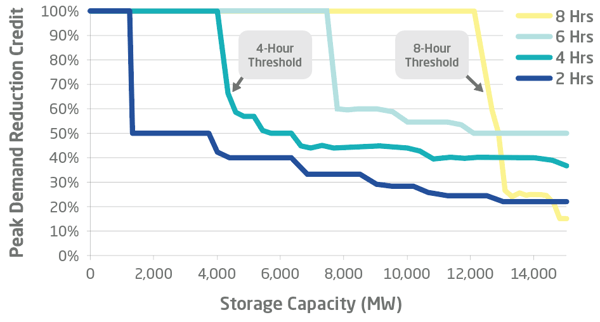 That’s a lot of energy storage that can directly reduce the CAISO peak electricity demand. Notice that it does not start with the premise that storage can only replace peakers that never run longer than a particular number of hours. Instead, it looks at the shape of the system net peak and figures out how much of that peak can be shaved at each duration layer. And the shape of the system peak is changing dramatically with solar adoption, which means energy storage has even greater impact over time, something we will look at in more detail in a coming post.

The new approach: the duration portfolio, a.k.a. the most cost-effective peaker

Let’s consider a theoretical utility with a 3,000 MW net peak load, 500 MW of which is met by a single peaker that is slated to retire. The question is: what’s the most cost-effective combination of storage and gas to meet the resulting peak capacity need?

Here’s the four step approach to answering that question:

Compared to the all-gas-peaker option, the utility realizes that it can save its ratepayers $125MM in CAPEX by procuring a combination of energy storage of varying durations as well as a smaller natural gas peaker.

Looking ahead: scaling up duration portfolios

Extrapolating this principle out to an entire network, such as the entirety of CAISO as shown in Denholm and Margolis’ research, the CAPEX savings of moving from all-gas to a duration portfolio quickly escalates into the billions of dollars.

What about OPEX? Without going into detail, the combined O&M and fuel costs for gas peakers are higher than energy storage, even when accounting for cheap natural gas and potential augmentation of the energy storage to maintain firm capacity. And, as noted at the beginning of this article, energy storage offers far greater grid value per megawatt than a gas peaker.

So, what are the implications of this approach being considered broadly?

We will see system planners studying their peak needs in ever-greater detail, and measuring their peak shape and duration needs ever more precisely. Advanced analytics and modeling techniques are already allowing system planners to predict system needs with unprecedented detail, including where storage can be best sited in their network to achieve maximum benefits.

Energy storage deployments will shave the upper layers of the net peak and push gas generation down to the base of the peak, where it will compete for the longer-duration megawatts. And the result will be a more cost-effective, cleaner, and more resilient grid.

Ray Hohenstein is a Market Applications Director at Fluence. Ray identifies markets and applications that are attractive for energy storage.