In July, the Australian Energy Market Operator (AEMO), which oversees Australia’s National Energy Market (NEM), offered Australians a glimpse into the future state of the Australian grid. In AEMO’s first Integrated System Plan (ISP), released a few months ago, it outlined the required level and fuel type of power generation investments Australia will need to make over the next 20 years to meet future demand in a reliable, low-cost manner. In addition, the ISP also focused in on what transmission investments will be needed to support system reliability over the long term.

What does this 20-year view say about the future of the Australian network? That Australia needs resources like energy storage to play a growing, critical role in adding speed of response, flexibility and resilience to the system.

AEMO’s goal in developing the ISP was to forecast, using a resource-agnostic model, what future electric resource investments Australia requires to affordably and reliably serve the country’s peak energy needs. The plan looks ahead to how current market services like Frequency Control Ancillary Services (FCAS) will evolve and what role they will play in the next 10 or 15 years. Most strikingly, the report provides a snapshot of what the hour-to-hour and day-to-day requirements of the network will look like over the next two decades.

Why is this kind of forecasting important? Utilities, developers and elected officials find this forecasting to be critical for three key reasons:

For over a decade, I did this kind of system optimization modeling in U.S. markets. During this time, my team learned a lot about modeling energy storage as a capacity resource and fully accounting for the benefits of storage. I recently dug deeply into the ISP and would like to share five key aspects of the report’s findings and why they are important for Australia’s power sector.

#1: As Renewables Scale Up, Storage is the Only Guaranteed Way to Align PV with Peak Demand

Similar to what we have seen in other markets ranging from Germany to California, as the Australian grid adds higher levels of variable generation, there will be significant levels of unutilized solar generation during the middle of the day (when demand is low)—able to produce energy, but due to transmission limitations, cannot export that energy to other load centers. Fast growth in variable generation will also create pressure points for the grid operator in terms of the amount of MW that can be controlled to manage variability in electricity supply and demand.

The graph below from the report indicates that during the middle of the day—when there is high solar generation and low demand—the proportion of controllable resources is expected to drop from about 75% today to as low as 29% in next 20 years during times of high PV generation and low demand. That means that if you are the operator, only 29% of total installed capacity is available for you to ramp up or down to compensate for momentary variations. 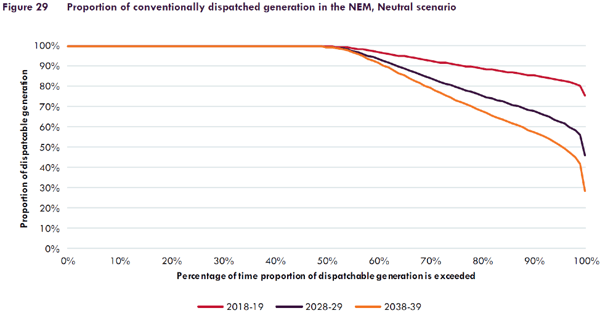 In addition, the report also finds that 20% of solar generation could be curtailed (i.e. underutilized) during the middle of the day without an appropriate amount of storage to shift the PV production to ensure it aligns with peak demand. 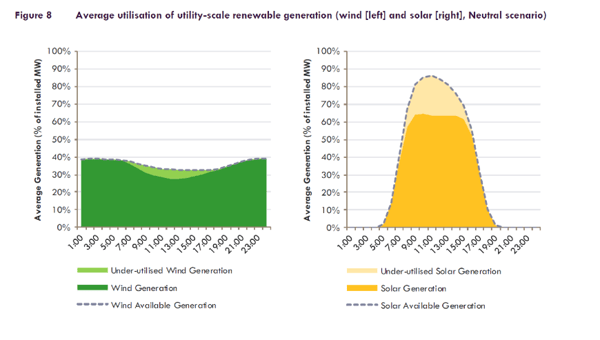 AEMO indicates that the two primary reasons for curtailment of renewable generation are 1) congestion on the transmission network and 2) the lack of capability to turn-down traditional synchronous generators and to keep them running at minimum levels during the middle of day. Energy storage would address both of these issues effectively by aligning renewable production with peak demand.

#2: In the Future, FCAS Needs in Australia Will Be Very Different, Storage a Critical Source

How much and where the eight Frequency Control and Ancillary Services are procured in the NEM will continue to change as higher levels of wind and solar are added to the grid. The first impact the ISP indicates is that the MW of FCAS services procured will grow as renewable adoption scales up further (see figure below). 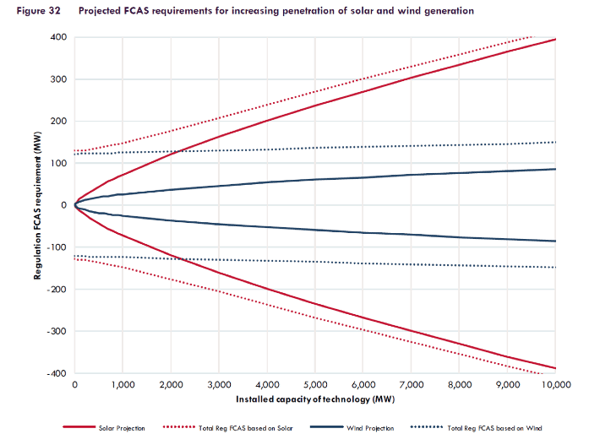 The second impact is that certain areas of the NEM with weak interconnection and high penetrations of renewable generation may need additional FCAS services or higher levels of headroom on the interconnector. Portions of South Australia and Queensland are specifically noted in the report as areas likely to experience these challenges and may require local FCAS support. Energy storage provides the highest quality FCAS, but adding this storage capacity in the right locations may be critical to balance the needs of the system.  As an example, using operating data from the 10MW Advancion Energy Storage Array deployed in Carrickfergus, Northern Ireland, QUB’s research found that just 360MW of fast responding batteries would be able to provide the equivalent stabilization to Ireland’s All-Island electricity system as would normally be provided by 3,000MW of conventional thermal generation.

Lastly, the need to add system inertia will be an ongoing concern as existing rotating machines retire. The ISP report notes that higher MW levels of 6-second FCAS are currently used to compensate for low-inertia situations in areas like South Australia. In the near future, new services like Fast Frequency Response (FFR) may be required in the NEM to address such inertia concerns, possibly in the next 3-5 years. AEMO also notes clearly (in Page 68) how frequency control services will need to be increasingly sourced from non-traditional sources (for example, from battery storage systems, demand-based resources, and renewable generation).

#3: Ramp Rates Will Become a Lot Higher, Making Storage a “Must Have” In Next 5-7 Years

Ramp rates in the future will be a lot higher than current levels.  This will create conditions that energy storage is best-suited to cost-effectively solve while adding flexibility to the network that has primarily been served by traditional inflexible generation. This situation is already occurring in markets like California, where the system operator (CAISO) is already experiencing ramp requirements that modeling originally anticipated would happen in the 2020/21 timeframe – 4 years ahead of the original estimate. Why is this happening? There could be several causes: 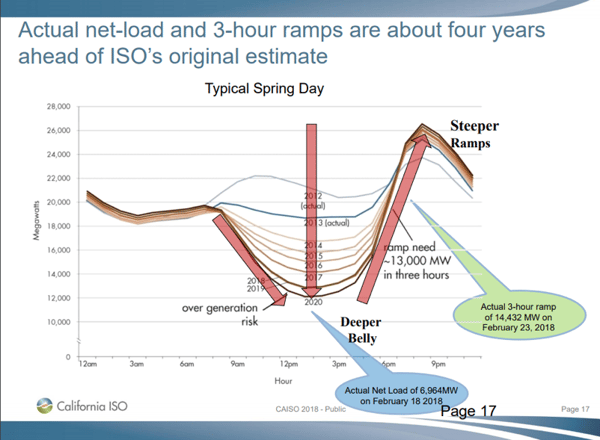 From what we have seen play out in California, changes in ramp rates can happen very quickly as we continue to add variable generation. AEMO projects that ramp rates (in MW per hour or MW per 3 hours) will almost double in the 1-hour and 3-hour timeframes over the next 10 years. 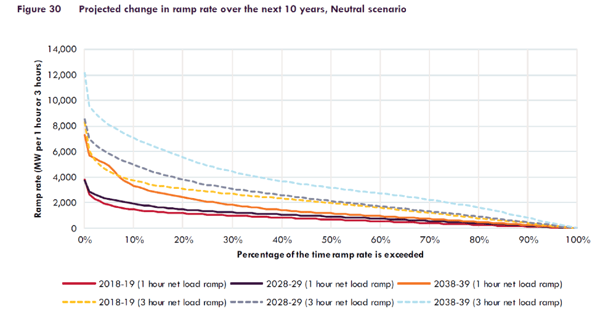 To meet such high ramp rates, the resources that are dispatched need to be flexible enough to vary their output and manage the variability of PV generation. Energy storage is the only proven way of adding flexibility to the overall system to cost-effectively meet the ramp rate requirements of the future.

One of the most important findings in the ISP: without transmission upgrades or the addition of storage, new wind or solar may face serious headwinds because of declining marginal loss factors  (MLF).

Although actual MLFs are determined through a separate process, the findings from the ISP are compelling, showing that MLFs may increase by as much as 35%. In other words, if you are a renewable developer in a region like North Queensland and negotiating contracts with off-takers based on the nodal price, you may be looking at a downside risk of price deteriorating potentially up to 30-35% because of higher MLFs.

However, deploying energy storage is a proven way of managing and avoiding the negative impacts of MLFs. If energy storage added at the solar or wind generation site is charging during times of high generation and low load, the storage will help improve the MLF in addition to shifting the solar/wind output to align with peak demand periods.

#5: Storage Provides a Faster-to-Deploy Source of Flexible Capacity for Contingencies

Lastly, the ISP identifies a few risks associated with serving peak and/or energy needs if an unanticipated retirement of a large coal-fired generation facility occurs in the system—at this point, not without precedent in the NEM. In that event, as the table below shows, South Australia and Victoria both have higher risk profile of not being able to serve 100% of regional load.

The California market faced similar risks to its load-serving capability when it faced an unexpected closure of a critical natural gas storage facility in southern California, which impacted the availability of fuel to supply gas-fired generation across the region. By the summer of 2017, two of the large investor-owned utilities in the state, Southern California Edison and San Diego Gas & Electric, expedited energy storage projects and added over 100 MW of energy storage in just eight months, providing peaking capacity to meet local reliability needs in the region.  Fluence delivered two energy storage systems to San Diego Gas & Electric to meet the summer peak requirements of the utility. Once utilities saw how readily storage could be deployed to meet local capacity needs, they have continued to procure battery storage—with Pacific Gas & Electric recently procuring over 500 MW of four-hour duration storage peakers.

One element missing from this table: that battery-based energy storage can be deployed in a matter of months, compared to the minimum 3-5 year timeline for large-scale pumped hydro projects, plus additional time for transmission upgrades to accommodate them. The time value of money associated with implementing energy storage projects faster and placing them into service can be significant for utilities and end-customers.

What Caught Your Eye?

Again, doing the analysis for a market-moving report like the ISP is a modeling person’s dream. That’s why my colleagues at Fluence and I were honored to have had the opportunity to provide feedback to the ISP process earlier this year. We thank the writers of the ISP for considering our feedback as longtime deployers of energy storage for its “Fast Change” scenario, which reflects rapid declines in battery storage cost. We look forward to staying engaged with AEMO as a resource to help Australia manage its grid transition.

What did you find interesting, fascinating or worrying from AEMO’s ISP? Connect with me on Twitter at @kiranak or leave a comment below.

See this article and other energy storage news on RenewEconomy.

Kiran Kumaraswamy is the VP, Market Applications at Fluence, a Siemens and AES company.

Less Than a Year after Introduction, Fluence’s Sixth-Generation Technology Is in the Field