As the sunniest region in the United States, the Southwest is leading the nation in solar power deployment. Solar in the region is abundant and the energy it generates is cleaner and cheaper than the fuel and variable operating costs of thermal generators. The only drawback grid operators have to manage is that solar is a variable resource – its output can’t be controlled to fully match customer demand. As utilities, businesses, and individuals switch to cleaner and lower cost renewable energy in droves, the region is now deciding how best to build the “capacity” needed to compensate for and back-up this variability.

Fluence’s most recent announcement with Salt River Project (SRP), AES, and Mortenson is the latest proof point that we can meet the energy needs of growing communities while driving toward an efficient, reliable, and low-carbon future. This latest technology deployment is a 10MW, four-hour duration stand-alone energy storage system designed to provide flexible peaking capacity that reduces the need for back-up thermal generation for renewable resources. 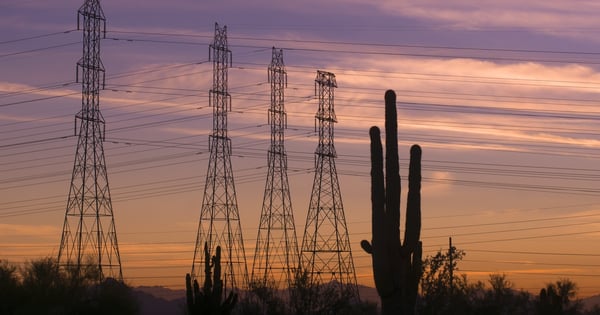 While there are still some groups pushing the continued use of peaking gas plants in the region, continued innovation, business friendliness, and a desire to improve the quality of life are hallmarks of the people that drive the region forward. Over the past year, Arizona has seen a flurry of new energy storage projects filling diverse needs on its energy network, including:

These projects, and many more like them across the country, have enabled groups and individuals such as Andy Tobin, a forward-thinking commissioner with the Arizona Corporation Commission (ACC), to introduce an energy modernization plan that calls for 3,000 MW of energy storage across Arizona by 2030 and a “clean peak” standard.

Arizona is not the only state in the region where stakeholders want to transform energy systems:

Experience and cost are the two main drivers for the rapid adoption of energy storage across the region. As more utilities and businesses operate the technology, they see firsthand its value in managing variability in the system and meeting peak system needs. These deployments also push the learning curve forward for technology providers and the cost of the subsequent projects come down.

For example, the total cost of a four-hour duration energy storage system today is now less than the total cost of a 20-minute system deployed just nine years ago. That is an increase in duration of 12 times at no additional cost – or, put another way, a 90 percent decrease in the cost of energy storage on a $/kWh basis. The total installed cost for short-duration energy storage systems is now 25 to 50 percent less than that of peaking gas plants used to meet ramping and short-term variability needs. In addition, the cost of long-duration energy storage is equal to or lower than the cost of peaking gas plants. That is without even calculating the significant amount of additional benefits it provides beyond that of peaking gas plants, such as a lower delivered energy cost, around-the-clock ancillary services, no emissions, a built-in fuel hedge and the ability to site it almost anywhere.

These price drops are putting pressure on both existing and new peaking power plants. Utilities, regulators, and rating agencies are now running scenario analyses to evaluate the risk of potentially owning stranded assets. All parties deciding the future of the grid understand that we can’t afford to invest in low-utilization, high-cost assets that run the risk of becoming obsolete in a short period of time. Investing in energy storage allows free economies to grow, without the burden of excessive or stranded infrastructure costs.

The people of the Southwest understand this. It’s an honor to work so closely with them as they take control of the energy transition that will ensure their continued success in the coming decades.