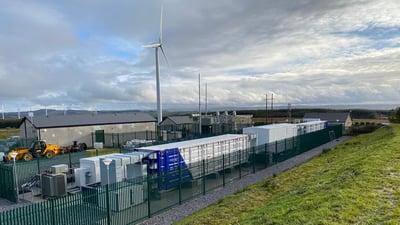 “10X thinking” is a mindset where one focuses on ideas that drastically improve the status quo rather than making incremental improvements – i.e., making things 10 times better vs 10 percent improvement– and has relevance to many sectors, including energy. Clean energy resources like solar and wind on their own can be argued to be a quick succession of incremental technological improvements – albeit ones that are changing the shape of wholesale power markets with lower-cost energy.  However, the combination of renewables and energy storage represents a wholesale transformation in how grids function overall – a key example of 10x thinking at work.

That transformation is happening quickly in Ireland – a country that recently set a goal of supplying 70 percent of its electricity needs from renewable energy by 2030, and is moving to procure more fast-responding resources like energy storage to ensure a stable transition. To meet the needs of Ireland’s rapidly-decarbonizing grid, the Fluence team have applied 10X thinking to battery-based energy storage technology, guaranteeing a controls-based response time over 60 times faster than traditional frequency regulation resources or 2,000 times faster than an Open Cycle Gas Turbine.

In 2015, when battery-based energy storage was new to the island of Ireland’s Single Electricity Market (SEM), and relatively new to the European Union in general, the focus was at first was providing a comparable service to traditional assets. The SEM’s first grid-scale energy storage was deployed by AES Energy Storage, now part of Fluence, a 10-megawatt project for Kilroot power plant in Carrickfergus, Northern Ireland. 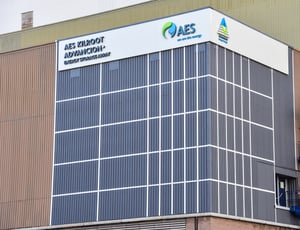 The Kilroot energy storage system was aimed at providing frequency regulation – actions taken to keep the grid's frequency in balance moment-to-moment – at timescales similar to other power generation assets, extending the larger power plant’s Harmonized Ancillary Services (HAS) contract by 10 MW of capability.

At the time, this was the only route to market for energy storage to be rewarded for the kind of services batteries excel at providing.  A standalone battery would not have been able to apply for and secure a HAS contract without being treated exactly as a large, centralized thermal power plant with a generation license – a paradoxical situation, as many such criteria were not applicable to an energy storage asset as - needless to say – it does not generate electricity.

Nevertheless, the customizability of the storage controls impressed the industry steering group (consisting of EirGrid/SONI, the Utility Regulator, and NIE Networks) overseeing the project in a number of ways:

The strong performance of the Kilroot energy storage system proved the ability of storage to provide superior services at scale and helped open the door to new and evolving markets in Europe and indeed around the world – welcoming over a thousand local and international visitors over the years.

In particular, researchers from Queens University Belfast (QUB) and UK-based energy consultancy Everoze worked with the team at Kilroot to review operational data from the project and investigate what faster capabilities battery-based resources could provide to the grid – notably super-fast frequency response and inertia – and the powerful impacts those could have on decarbonization.

The research found that there is significant value in rewarding batteries’ speed, precision and “digital inertia”-like qualities. They estimated that battery-based energy storage, with greater than 10X faster response times, could support the grid operator in stabilizing the grid with one-tenth the capacity than would be needed from thermal generation to provide the same services.

The Kilroot array later went on to provide such faster response services under the SEM’s Delivering a Secure Sustainable Electricity System Volume Uncapped program, or DS3 for short, which it continues to do today.

As Ireland’s generation mix has a high percentage of intermittent wind generation – at 36 percent, the highest wind penetration level in Europe – Irish regulators realized they needed faster resources in order to keep up with greater supply-demand imbalances that result in frequency deviations. As a result, they created a new service for the DS3 market, Fast Frequency Response (FFR), with the goal of ensuring ultra-fast balancing resources are ready to support integration of more wind.

The performance standard for FFR is for assets to provide frequency raise/lower services a response time of less than 2 seconds, but with a sweetener: a scaling pay-for-performance incentive placing the highest value on resources with ultra-fast response times – 3 times the base payment for responding within 150 milliseconds.

Last year, Statkraft Ireland sought to be the first mover in the Irish market, and partnered with Fluence on a 11 MW energy storage solution to be integrated with Statkraft’s 23 MW Kilathmoy wind farm. Earlier this year, Fluence and Statkraft commissioned the 34MW hybrid wind-battery project, specifically engineered to perform at the top end of this response scale.

Building the fastest responding battery energy storage project in the world – and providing maximum value to the Irish grid – required 10x thinking from our team. To successfully complete Kilathmoy, the Fluence team built on learnings from the Kilroot project. We took the already proven controls and supercharged through a combination of highly efficient system coding and proprietary techniques to achieve nearly an order of magnitude improvement in response time.

Next 5 Years: Fleets of Storage Strengthening the Grid for “70 by 30” Goal

Proof of energy storage’s ability to manage frequency to EirGrid’s highest standard comes at a critical time – the Irish grid is poised to deploy 12 GW of renewable generation in the next 10 years as part of its binding commitment to meet 70 percent of its electricity needs with renewable resources by 2030. A recent report by Baringa Partners projects that the SEM will require 1.7 GW of energy storage to meet this goal, including more ultra-fast responding assets like the Kilathmoy solution, as well as the ability to time-shift growing amounts of energy across more of the day.

In addition, several other markets are starting to follow Ireland’s lead:

Fluence has a long track record of helping to pioneer new energy storage applications (over 40 and counting) that provide new, smarter ways to integrate increasing levels of renewables onto grids around the world.

Marek is a managing director at Fluence with over a decade of experience in clean tech, which includes playing an instrumental role in delivering Europe’s first grid-scale commercial storage project in 2015. He leads the UK, Ireland & Israel team where he is responsible for overseeing the origination, development and commercial negotiation of energy storage technology and services sales.