In recent years, a consensus has emerged across the energy industry—and among regulators—that utility-scale solar-plus-storage (S+S) is an economically viable alternative to natural gas peaker plants. Last year, Fluence teamed up with a group of MBA students from Carnegie Mellon’s Tepper Business School to ask, “What’s next?”

Specifically, the students set out to determine if, where and under what circumstances S+S can compete—operationally and financially—against the mid-merit, load-following capabilities of natural gas combined cycle (NGCC) power plants. To answer this question, they dove into dispatch data from 435 NGCCs across the United States—obtained from the Environmental Protection Agency—and figured out a way to make an apples-to-apples comparison between mid-merit NGCC and energy storage.

The surprising results are in the chart below: S+S can compete—operationally and financially—with mid-merit NGCC plants in many regions of the United States today. For example, in the California Independent System Operator (CAISO) service territory, the net levelized cost of energy (net LCOE, defined below) for S+S runs from $39 to $48, with a mid-point of $43.20. A comparable mid-merit NGCC would have a net LCOE of $60-$116. 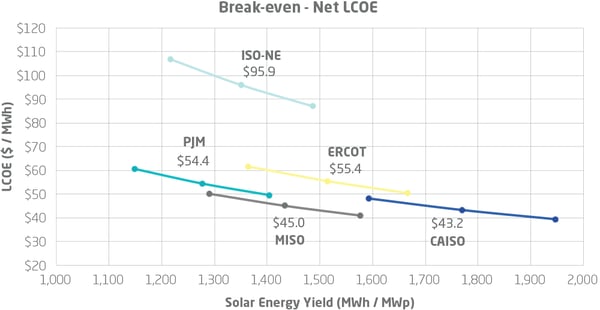 The S+S price ranges in the chart represent the “break-even frontiers”: If the net LCOE of a traditional mid-merit plant falls above the frontier for a given region, a utility is better off choosing S+S instead. Based on their respective break-even lines and current NGCC costs, S+S is also solidly competitive with NGCC in the Midcontinent Independent System Operator (MISO) region, and closely competitive in the PJM Interconnection (PJM) and Electric Reliability Council of Texas (ERCOT) regions. The only region where S+S is not competitive, at present, is ISO-New England (ISO-NE). Details of the comparison between Net LCOEs for NGCC and S+S plants is shown in Figure B.

Figure B. Net LCOE comparison of NGCC and S+S plants across regions and clusters

I am going to get to how the students figured all this out in a minute, but first I want to put this white paper—and why they did it—in context.

Energy storage in general, and companies like Fluence, have, in recent years, moved to the front lines of the global energy transition. Every time another business, city, state or country announces its intention to run on 100 percent clean energy, it means grid-scale storage will be needed to integrate and balance the large amounts of renewable power required to meet these goals.

Looking beyond peakers, tracking the ability of solar and storage to compete with mid-merit natural gas is the first part of a much larger question—how fast can we replace all natural gas—and even base load—generation with renewables and storage? In response, the storage industry is now pivoting its focus toward long-duration systems—and which technologies are best positioned to supply storage with the 6-10 hours of duration, or longer, that will be required to meet this stretch goal.

Many lithium-ion storage systems—standalone and S+S—now being designed to provide peaking power or other grid support services have two or four hours of duration. Significantly, in almost all cases, the hypothetical S+S plants in this study were sized with lithium-ion batteries with six hours’ duration; in only one instance were systems sized at four hours.

Last year, my former Ph.D. advisor, Jay Apt, invited me to work with a group of Carnegie Mellon MBA students looking for a big question to answer for a semester-long capstone project. Specifically, the group was interested in finding a topic related to energy policy and the very essential role business should play in the transformation of our energy system, and efforts to curb climate change.

In academic research, formulating such questions can be tricky. They have to be focused enough to solve a definable, real-life problem, but large enough to have impact beyond the problem itself.

The key challenge for the group was sizing and valuing solar plus storage so it could be compared on an apples-to-apples basis with mid-merit NGCC generation. While the levelized cost of energy (LCOE) has long been the standard measure for comparing costs of different forms of generation, its use for valuing S+S has been controversial.

On the one hand, if an S+S project is not sized to reflect what a comparable NGCC plant actually does, it could result in what some critics say is an artificially low LCOE. For example, adding 10 megawatts (MW)/40 MWh of energy storage to a 100 MW solar farm does not provide generating capabilities equivalent to a 100 MW NGCC plant.

Others have argued that a traditional LCOE for S+S could be priced too high because S+S provides benefits other than energy that are not factored into the levelized costs. More to the point is the basic contention that since storage has a finite duration and solar only produces energy during the day, S+S cannot be fairly compared to NGCC, which can run continuously as long as natural gas is supplied.

Untangling these complexities pushed the team to develop an innovative, three-pronged methodology.

Jobs to be done

The first question to be answered was—what does a traditional mid-merit NGCC actually do? Working for Fluence, I had become familiar with an approach to innovation and product development known as “jobs to be done.” The theory, developed by Clayton Christensen, a professor at Harvard Business School, says essentially that people choose or “hire” any specific or new product over another because it fulfills a very defined need or “job” better than the original one.

In a classic example, Christensen found that people were “hiring” McDonald’s milkshakes early in the morning because they had long commutes and needed something easy to hold to fill them up and keep them awake—jobs a banana or donut or bagel didn’t do as well. In the afternoons, on the other hand, customers were hiring the milkshake for an entirely different job—as a form of entertainment for their children.

While the “jobs to be done” framework has not been widely applied in the electricity sector, at Fluence, we found it to be a natural framework to think about energy storage, and the many “jobs” it is hired to do. Thus, in the case of mid-merit NGCCs, the team looked what these plants do—the load-following capabilities needed to respond to daily fluctuations in power – as the “jobs” customers need to be done.

And to quantifiably define those “jobs,” the team obtained hourly generation and capacity data for 435 existing NGCC plants in the U.S. from the Environmental Protection Agency (EPA) Air Markets Program.

Our next step was to replace the milkshake—that is, size S+S plants that could perform the same jobs, and ideally do them better.

The team developed a clustering algorithm, which resulted in six groups or “clusters” based on the similarity of their load-following, power generation profiles. These generation profiles represent the different “jobs” the NGCC plants perform in their respective power markets. For example, certain clusters have generation profiles that ramp relatively early in the day, while others ramp later in the morning. Some have a single characteristic peak and others have two.

Besides what was visually apparent in the clusters, testing them against descriptive variables such as geographic region, renewable penetration, and proximity to load centers did not reveal any correlations. In other words, we couldn’t predict what cluster a plant would fall into based on its location or other characteristics.

The team then sized S+S plants that would replicate the clusters’ various demand profiles, based on a hypothetical 100 MW NGCC.

In answer to the too-high, too-low arguments surrounding the use of traditional LCOE calculations for valuing S+S, the team developed a metric we call the “net LCOE.” Unlike traditional or gross LCOE, this new metric factors in the additional benefits, such as ancillary services, that an S+S or NGCC plant provides the grid and subtracts them from the numerator of the traditional LCOE equation (The full equations for traditional and net LCOE are included in the white paper).

For this study, in particular, the team looked at a range of variables affecting the net LCOE, such as whether ancillary services included in the calculation do or do not include frequency regulation. The team assumed that in all comparisons, construction would begin in 2019, and that all S+S plants are eligible for the 30% federal investment tax credit (ITC). However, looking ahead to the phase-out of the ITC, we have provided figures for an LCOE that does not include the credit.

The net LCOE formula can also be extended to account for other externalities such as reduced carbon dioxide emissions and faster ramp rates from S+S, not included in the present study.

Again, the study shows that the net LCOE of S+S is already more economical compared to NGCC in many regions across the U.S., with variations based on the demand profiles of the individual NGCC clusters.

Figure C breaks down the net LCOE for a S+S plant in the CAISO region, showing how, besides the value provided by ancillary services, storage offers significant value for mid-merit generation through load shifting. Following the “jobs to be done” framework, and thus selling the energy only when it matches the NGCC dispatch curve, the S+S asset has a net LCOE of $43.25/MWh. An NGCC plant doing the same “job” would have a net LCOE of $72.90/MWh. (Again, the full paper contains the basic cost assumptions used here.)

If we remove ITC impacts from the model, the net LCOE for S+S becomes $59.80/MWh, which is still significantly lower than the NGCC.

Looking ahead: Are we there yet?

The methodology and findings in this study offer significant insights for utilities and planners evaluating different technologies for mid-merit generation:

The energy transition we are now in the midst of seems to run on tipping points—a new technology or other advance builds momentum with early adopters and starts to go mainstream. Growth then accelerates faster than anyone expected.

Whether replacing natural gas peakers—or mid-merit generation—is the tipping point for renewables and energy storage remains an open question. But the forward-looking work of the Carnegie Mellon students, comparing S+S and NGCC, suggests that if we are not at the tipping point, we are very close.

Important Notice: This document is part of an industry-sponsored project that was completed in the all of 2018 by a group of MBA students from Carnegie Mellon’s Tepper School of Business. The industry sponsor was Fluence Energy, LLC. The methods, models, and results of this analysis are localized to the scope of that project and are in no way exhaustive in identifying methods and structures to solve the project scope. The members of the student team were Matt Beers, Panagiotis Bourtsalas, Ben Cerroni, Dave Deckelman, Brian Freeman, Zack Lippert and Tom Reeves. The faculty supervisors were Jay Apt and Chris Telmer.

Colleen Lueken is the Lead Data Scientist at Fluence. In this role she leads analytics and machine learning projects to build, operate, and maintain our energy storage solutions better.