In the previous blog post in our Solar + Energy Storage series we explained why it makes sense for the grid, solar developers, customers, and the environment to combine solar + energy storage. In this and subsequent blog posts, we will deep dive into the benefits and trade-offs of AC vs. DC coupled systems as well as colocated versus standalone systems.

Although the phrase “solar + storage” is thrown around in energy circles frequently, little attention is usually given to what kind of solar + storage people are actually referring. Generally speaking, solar + storage can be configured in three possible ways: 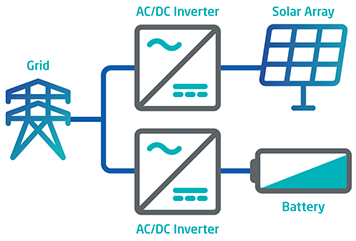 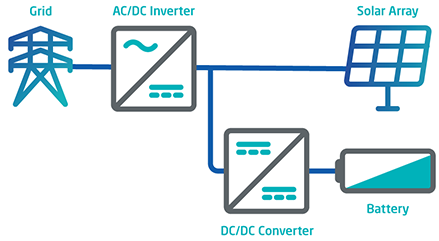 Solar and storage do not have to be co-located to unlock their mutual benefits. No matter where it is located on the grid, a standalone energy storage facility can provide grid services and shift blocks of firm renewable energy to the evening peak. If solar resources are located far from congested load centers the optimal physical configuration can be to locate standalone storage near load centers. For example, Fluence built a 30 MW four-hour duration battery near San Diego to ensure local reliability and increase renewable energy use.  Utilities and developers should focus on locating storage systems wherever they have the highest net benefits, which may or may not be co-located with solar.

The Advantages of Co-location of Solar + Storage

In many circumstances, there are substantial advantages to co-locating storage and solar. By co-locating, the solar + storage project can share the balance of plant costs including the cost of land, labor, project management, permitting, interconnection, operations and maintenance.  In the United States, project owners can also claim the Investment Tax Credit on most of the storage capital costs if it is charged with solar energy.

Co-located systems can either be AC coupled, where the storage and solar PV are physically sited in the same location, but do not share an inverter; or it can be DC coupled, where solar PV and storage are coupled on the DC side of a shared bi-directional inverter.  The cost savings from sharing the balance of plant costs are substantial.  An NREL study estimated that for co-located AC-coupled and DC-coupled solar + storage, balance-of-system costs were 30% and 40% lower, respectively, by 2020.

To DC or not to DC, that is the question

There are key factors to consider when evaluating DC-coupled solar + storage systems. The main advantages of DC-coupled systems are:

The one potential drawback of DC-coupled systems is they have less operational flexibility than their AC-coupled cousins because they can be limited by inverter capacity when there is excess interconnection capacity. For example, if a solar developer expects high demand during hours of peak solar production, it may not be able to simultaneously discharge the battery to supply the load.  While this is a potential drawback, we do not expect this to be a big issue in most markets.

See a summary of DC- vs. AC-coupled systems below: 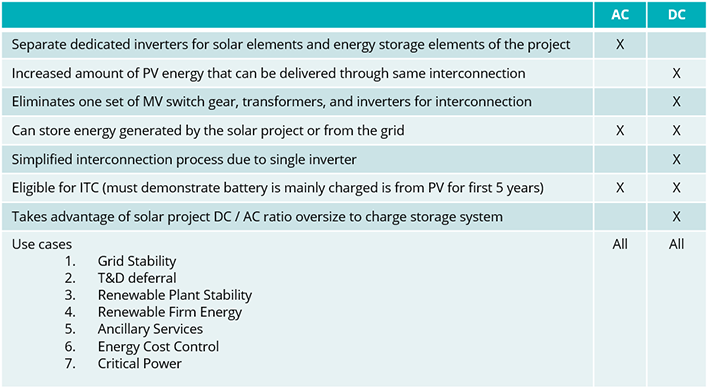 We believe that a DC-coupled system is the optimal system configuration for providing firm solar energy for long blocks of time, for example 4-6 hours, because of its ability to capture clipped energy and reduced balance of plant costs due to the shared bi-directional inverter. We expect to see an increase in DC-coupled deployments in the coming years as grid operators increasingly confront horse-sized duck curves, as described in our previous post.

Our recommendation for the best solar + storage configurations for different energy storage use cases is as follows:

In conclusion, we think that solar developers will be Thunderstruck when they see how DC-coupled solar + storage can put solar projects Back in Black. To draw from some AC/DC lyrics, “for those about to rock, we salute you.”

Check out the other posts in this series to dig deeper into the details of solar + storage.

James Mashal is an Analyst and Taylor Sloane is an Associate on the Market Applications team at Fluence. They identify markets and applications that are attractive for energy storage development.