The increasingly evident effects of climate change are propelling governments, utilities, power providers and grid operators around the world to strengthen their carbon-reduction targets and speed deployment of available renewable technologies. The UK and Ireland have been among the leaders in this respect – not only in setting ambitious climate targets, but also in increasing renewable energy use and electric grid modernization. With energy storage as the linchpin of decarbonized electric grids, it’s not surprising, therefore, that they are also leading the way in global energy storage deployments. Fluence, which has nearly 1 GW and more than 1.5 GWh of energy storage deployed or awarded in these two markets, is proud to support our partners there with technology, market expertise and operational experience as they help drive a clean and more resilient energy transformation at breathtaking pace.

The Irish SEM: From Super-fast Batteries to Super-robust Assets

The Irish Single Electricity Market (SEM), which covers both the Republic of Ireland and Northern Ireland, is making rapid strides in renewable energy deployment, as well. A decade ago, Irish grid operator Eirgrid set – and looks poised to have achieved – its goal of generating 40% of electricity from renewable sources by 2020, drawing almost entirely on onshore wind resources. The Republic of Ireland published a bill in October 2020 further committing Ireland to net-zero carbon emissions by 2050 and is aiming for 70% renewable electricity by 2030. The island is well-positioned to meet its goals and in need of copious amounts of energy storage to achieve them.

The Irish SEM is particularly interesting (from an energy storage nerd perspective) because of Eirgrid’s “Delivering a Secure Sustainable Electricity System” (DS3) program, which seeks to “increase the amount of non-synchronous [i.e. renewable] generation on the Irish power system in a safe and secure manner” and has developed a pay-for-performance mechanism to do so. Designed to ensure that new sustainable technologies provide comparable flexibility and stability services to traditional generation resources – and that assets get differentially paid based on how well they do this – the program has spurred energy storage technology providers to develop new innovations for customers in Ireland whose projects must meet stringent demands.

The Republic of Ireland and Northern Ireland have been first movers in energy storage several times over, and Fluence is proud to have supported our partners there in the transformation of electricity networks over the past five years. Our first project in Northern Ireland was also the first commercial battery-based energy storage system in Europe – a 10 MW / 5 MWh system at the AES UK & Ireland Kilroot Power Station, deployed in 2015 to provide frequency regulation and an early demonstration of the capabilities of batteries to provide “digital inertia”. 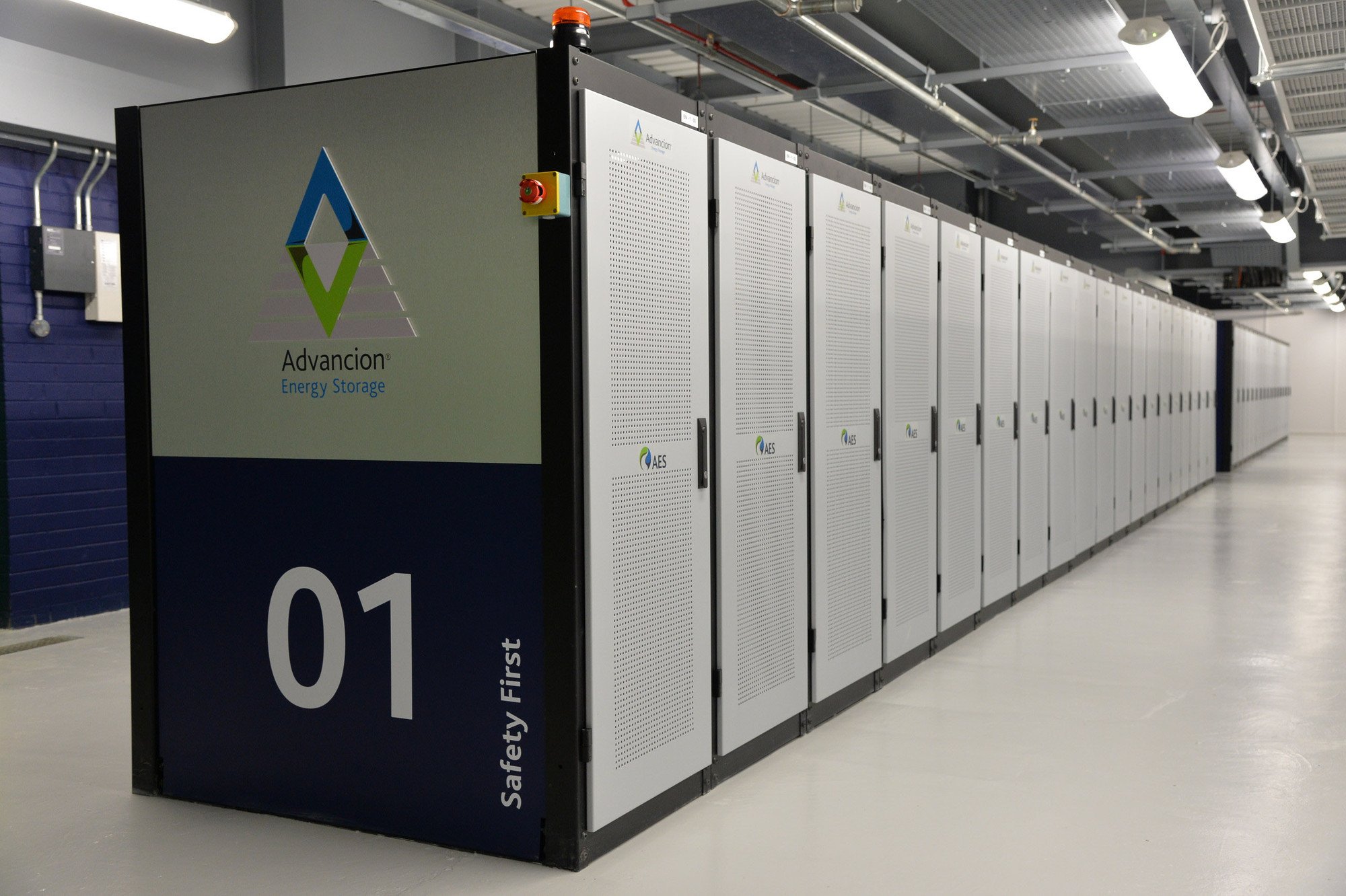 The project was also the subject of a report by UK energy consultancy Everoze (“Batteries: Beyond the Spin”), which found that using batteries to stabilize the grid in the SEM could save millions in euros and tonnes of carbon emissions. Operators on islanded grids with large amounts of renewables frequently rely on inertial response from thermal power plants to maintain electric grid stability. Research by the Fluence team and Northern Ireland’s Queens University Belfast found that battery-based energy storage can provide inertial response for system reliability – “digital inertia” – much more efficiently, at a lower cost and with substantially reduced emissions than nearly ten times the quantity of thermal generation.

Our next project was an 11.1 MW / 5.6 MWh storage system paired with 23 MW of onshore wind at the Statkraft Kilathmoy wind farm. It was the first hybrid wind + storage project in the Republic of Ireland and also the fastest response battery in the world, designed specifically to meet stringent DS3 Fast Frequency Response (FFR) requirements and respond in milliseconds; over 60 times faster than traditional frequency regulation resources, and 2,000 faster than an open cycle gas turbine. It also provides stacked voltage support for the grid through the steady-state reactive power (SSRP) DS3 service.

More recently, we have seen a trend towards fleet buyers (Fluence is currently working with three major fleet customers in the Irish SEM - Statkraft, Gore Street Energy Storage Fund plc and ESB) looking to deliver multipurpose energy storage assets that can provide the much-needed infrastructure of flexible capacity at both larger scale and longer duration. These steps diversify the revenues and capabilities of energy storage systems that can allow them to stack balancing, trading and capacity revenues in addition to the super-fast DS3 capabilities of our platform and better enable them to adapt to new market requirements.

Gore Street Energy Storage Fund plc, which chose Fluence as a partner for two 30 MW / 30 MWh projects with 6-year contracts, is an example of this. The listed energy storage fund manager recently applied to triple that capacity, up to 180 MW, taking advantage of the mass-customization capabilities of our configurable technology stack.

This trend toward fleets is further evident in several recently announced projects we’re working on for the Republic of Ireland’s state-owned utility ESB - a 19 MW system at Aghada and a 30 MW system at Inchicore. According to Aurora Energy Research, as of December 2020, Ireland had just 24 MW and 12 MWh of grid-connected battery-based energy storage in operation. The Aghada and Inchicore projects are ESB's first major battery projects and, at 2 hours of duration each, mark a step change in the scale of stored energy capacity in the market. Previously, operational battery energy storage systems in Ireland were all short duration - capable of providing a full power discharge for 30 minutes or less. The longer-duration Inchicore and Aghada systems (38 MWh and 60 MWh, respectively) are better able to time shift renewables and replace many of the services historically rendered by fossil-fuel powered generation assets, including providing flexible capacity under Ireland's 10-year Capacity Market contracts.

The UK was the first major economy to legislate net zero emissions by 2050, and in December 2020, the government announced one of the most ambitious carbon reduction time frames – at least 68% reduction in greenhouse gas emissions compared to 1990 levels by 2030. A December 29 Bloomberg article notes that “Britain’s power generation industry is headed for its greenest year yet as more renewable capacity is added and coal plants are needed less often,” with the UK generating 50% or more of its electricity from wind on August 21 and December 26 last year.

Already the cheapest form of electricity for two thirds of the world’s population, more renewable energy is good for the planet and our wallets, but its variability can create challenges for the electric grid. For instance, countries with high renewable penetration but not enough energy storage capacity often rely on curtailment to keep the grid balanced – an inefficient solution: analysis by LCP found that "Wind curtailments between Scotland and England are expected to cost consumers £1 billion per year by 2025.”

Energy storage is the linchpin of decarbonized electric grids, which is why we’re seeing record-setting deployments in the UK with over 1 GW (1000 MW) now in operation. Among many other functions, energy storage helps balance the grid and avoid curtailment by absorbing excess renewable energy. It also boosts the use of renewables by dispatching wind- and solar-generated energy on demand and acting as “virtual transmission lines” to alleviate network congestion and move renewable energy from generation sites to load centers.

Fluence is working with a number of partners in the UK to deliver on the country’s promise of a cleaner future. We began in 2015 with what today would be regarded as a small project – the aforementioned 10 MW / 5 MWh Kilroot Power Station project in Northern Ireland. The scale of deployments has grown rapidly since then: In 2018, we announced what was at that time the world’s largest fleet transaction with a single customer, Sembcorp, for 120 MW / 120 MWh of projects at five sites to provide capacity and system services to National Grid ESO.

In late 2020, shortly after the Government agreed to increase the local planning threshold for energy storage from 50 MW to 350 MW, InterGen announced it had achieved planning permission to build a battery storage project at DP World London Gateway; the project, which will support and stabilize existing electricity supplies using our sixth-generation Gridstack™ energy storage system, will be the UK’s largest battery storage project by a factor of 10 (320 MW / 640 MWh) and use to provide a meaningful energy balancing and arbitrage capability on an increasingly variable and volatile grid. 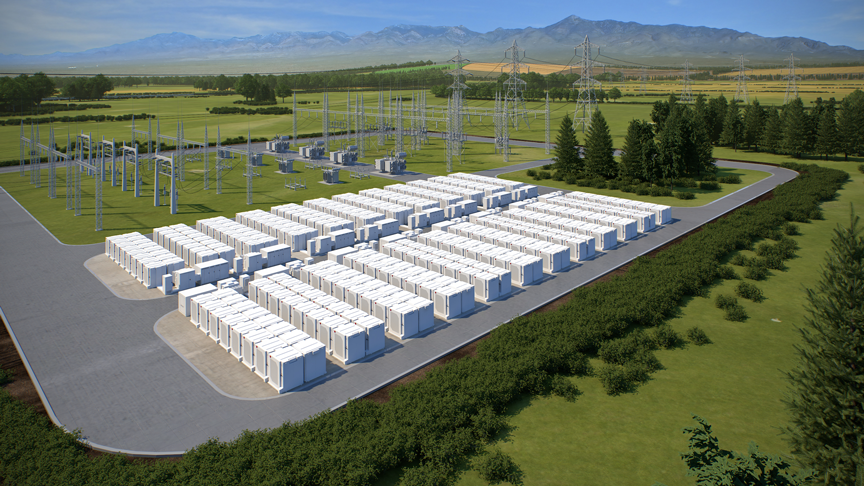 Fluence remains focused on both delivering at the scale needed to transform the way we power the UK and also pushing the envelope on the range of services that battery energy storage can provide. To reach the UK’s net zero ambitions, the future grid needs to run at times without any fossil fuel generation to stabilize and balance renewables. As such, new challenges are emerging that digital technologies can and must solve. National Grid’s launch of multiple Constraint, Stability and Voltage Pathfinders is designed to address this and provide the opportunity for energy storage to deliver new grid stability services like reactive power, short circuit level contribution and inertia. Whilst these are complex to deliver, control and stack, Fluence has extensive experience pioneering first-of-a-kind use cases and optimizing the value they can provide.

The Stage Is Set for Replication

The UK and Irish electric grids are both in their respective ways at the leading edge of decarbonization, with record-breaking amounts of renewable energy capacity and a pipeline of energy storage deployments to keep pace with increasing amounts of non-synchronous generation. Fluence is proud to have worked with partners in these markets over the past five years to develop many first-of-a-kind technological innovations and new applications for battery-based energy storage that are being applied to other markets worldwide, as other countries set and reach similar decarbonization and renewable penetration milestones. Ultimately, safe, reliable energy storage is the key to delivering cleaner, more resilient, and more efficient electric power systems in the UK, Ireland, and beyond.

Interested in learning more about our work in the UK and Ireland?

Marek is a managing director at Fluence with over a decade of experience in clean tech, which includes playing an instrumental role in delivering Europe’s first grid-scale commercial storage project in 2015. He leads the UK, Ireland & Israel team where he is responsible for overseeing the origination, development and commercial negotiation of energy storage technology and services sales.