The entities that control and operate the backbone of our electricity system—transmission system operators (TSOs, also known as TNSPs, TOs, or TNOs across different markets[1])—are facing a once-in-an-industry moment. Both national and regional governing bodies are setting more ambitious climate policies. The European Commission has proposed to increase the renewable electricity target to 65% by 2030, while the current U.S. administration aims to achieve 100% carbon pollution-free electricity by 2030, with at least half of it coming from clean energy sources. At these levels, there will be extended periods where all electricity in the power grid will be generated by renewables and low-carbon resources.

This will require monumental changes in how TSOs plan and operate their systems. They must maintain the complete reliability of the power system even as generation technologies, power flows, and operational procedures undergo fundamental change—failure to do so can mean devastating consequences for the system, including brownouts and blackouts. 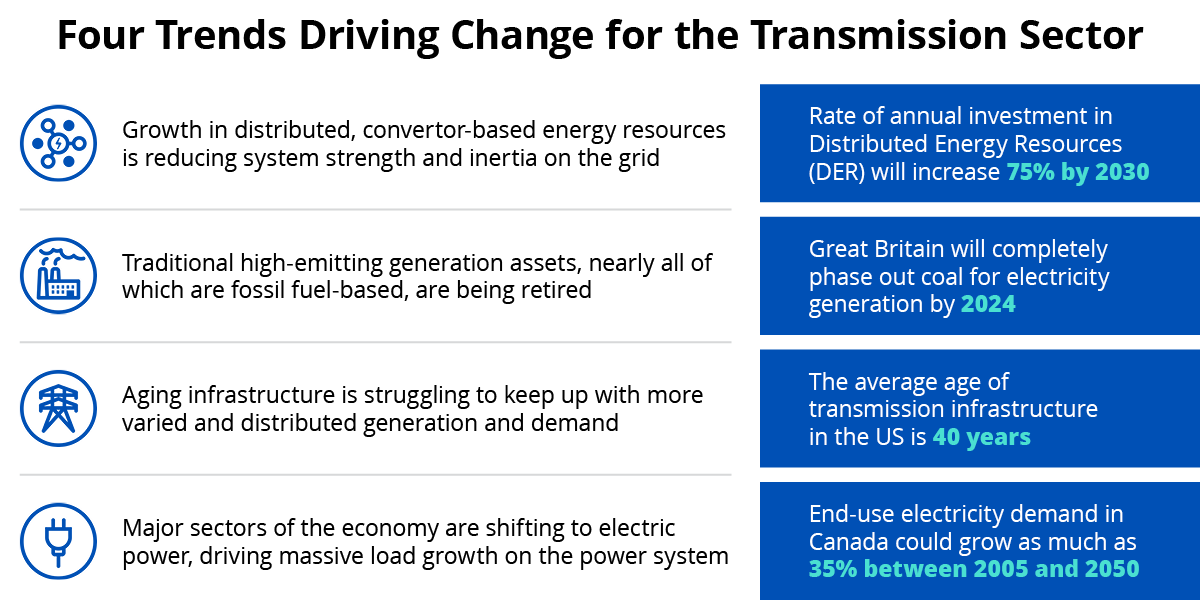 For TSOs, the stakes are high: the pace at which they can adapt systems to accommodate these changes—changes that will only accelerate in the coming years—determines the pace at which we decarbonize the power sector globally and the extent to which we can keep global temperatures from rising past 1.5℃. With energy transition comes a set of challenges facing TSOs, and opportunities: to redesign a more flexible, efficient, and resilient power system while accelerating decarbonization efforts.

We’ve created this six-part blog series to take a close look at the five greatest challenges TSOs face now and in the near future, how they can be solved, and the opportunities each presents. In this first part, we provide an overview of each of these challenges.

A changing generation resource mix, coupled with new drivers of demand, is creating a host of supply and demand challenges. While our existing power grid is based around centralized, large-scale power plants, the grid is rapidly transitioning to more distributed and renewable generation. Solar, wind, and hydroelectric power are all located where the natural resource they rely on is most abundant and economic, often pushing generation assets further from load centres and into new regions with limited existing transmission infrastructure.

As a result, bottlenecks can occur across power networks, in some instances causing solar and wind projects to be curtailed because their output cannot reach load centres.

This trend is visible around the world, from Germany to India, Chile to Australia. New York State provides a particularly vivid example of this: nearly 60% of the state’s demand comes from New York City, which until recently was largely met by fossil-fuel plants in and around the city. As those are replaced by hydroelectric plants, wind farms, and solar plants, the power supply moves farther from the source of demand, putting more pressure on the transmission system to shuttle volumes of electricity it was never built to handle.

For the past century, power plants have burned fossil fuels to produce steam that turns huge turbines. These turbines are connected to generators that convert the rotational energy into electricity, which is then transmitted through the power grid. As a side effect of their continuous movement, these rotating masses also provide inertia instantaneously, offering an automatic, dynamic response to changing conditions on the system such as deviations in frequency and voltage. This response allows them to arrest dangerous changes until other assets can ramp up and respond to severe grid disturbances.

As the conventional plants are replaced by inverter-interfaced sources like solar, wind, and high-voltage direct current links that do not add inertia to the system, TSOs face the reality that there may not be a sufficient amount of free, inherent inertia available when needed. That may become especially evident during periods where the mix of renewable power on the grid is higher, or load is lower. This will change how TSOs evaluate solutions to maintain system strength and stability, heightening the need for new inertial, fast frequency, and dynamic voltage control services.

The proliferation of distributed energy resources (DERs) being connected to the distribution system and behind customer meters is obscuring TSOs’ views of generation activities on their grids. Rapid rises in DER deployments are becoming increasingly common, with myriad examples like Spain increasing its MW of distributed solar 30% from the year before.

As DER installments rise, TSOs must keep grid frequency within safe operating parameters amidst reduced visibility of load and generation on the grid. On the generation side, TSOs can no longer anticipate generation power by looking across a handful of large assets; they must collaborate more closely than ever with Distribution System Operators (DSOs) to identify numerous small-to-medium DERs dotting their grid. Successfully doing so will also enable TSOs to capitalize on the excess power many of these DERs’ owners are eager to sell back to the grid.

On the load side, as more homes install intermittent, behind-the-meter renewables while electrifying heating systems and introducing electric vehicles, net demand shifts and becomes more variable. If they can monitor and direct thousands of these hard-to-identify assets, TSOs will be able to leverage them to better balance supply and demand.

To create the foundation for the power system of the future, TSOs must invest in a host of costly new assets. In Germany, grid operators are projecting capital spending in the range of €61bn between now and 2030, up massively from a €33bn estimate in 2017. Estimates for US transmission modernization costs are staggering, with $1.5-$2tn by 2030 on the lower end.

But decreasing regulated return rates and increasing scrutiny of capital deployment means TSOs have less capital to work with. Added to that, protracted disputes over the location of the new assets and rising grid fees (which increase electricity costs for ratepayers) will add pressure on TSOs to avoid big CAPEX outlays where possible. This will leave them with the challenge of increasing utilization of their existing assets, deploying new technology, and engaging in new commercial models amidst rising electricity demand and ageing infrastructure.

To effectively meet emission targets and growing demand, TSOs will have to harness new transmission technology and integrate new hardware onto the grid. Innovators and entrepreneurs around the globe are developing new technologies and processes to support TSOs on their path to a green grid. But much of it looks nothing like what TSOs have been investing in—and getting paid to manage—for the past century.

In most non-monopoly markets, TSOs can’t own any generation assets, of which energy storage has often been classified as a subset by regulators. Discovering an increasing number of use cases for storage-as-a-transmission-asset, TSOs will continue to struggle through red tape if ownership roles for battery storage systems remain unclear.

It’s a daunting list, but not insurmountable. In this series’ next five articles, we’ll look closely at each of these challenges as they exist today and how they will accelerate in the near term, how they’re affecting transmission networks and systems operations, and the critical role energy storage plays in solving each of them.

TSOs are learning from the growing number of transmission projects that yield greater benefits when energy storage is involved; projects that defer investments in a variety of fundamental, single-function grid assets like wires, poles, and substations; and projects that increase the efficiency of new and existing network investments. With the pace of energy storage technology advancing rapidly, these systems are helping TSOs maximize value from the transmission and distribution infrastructure they already own and use – serving ratepayers and decarbonization goals alike.

[2] Graphic: Four Trends Driving the Change for the Transmission Sector