This is the fourth deep dive in our series on the five challenges transmission system operators (TSO) will face in 2022 and beyond. If you’re new to the series, read our overview of each of the challenges and catch up on TSOs' first three challenges: intermittency and congestion, weakening grid stability, and reduced visibility of grid assets.

Throughout this series, we’ve underscored the pace and shape of change facing electricity grids globally as they work to integrate renewables. While this comes with increasing costs for TSOs, pressure is mounting for them to invest wisely and keep the cost of building and operating new transmission infrastructure as low as possible. For our fourth installment in the series, we look at the challenges posed to TSOs by increasingly tight capital restrictions and how new technologies like storage-as-a-transmission-asset (SATA) can address them.

Much of the grid infrastructure in use today – built in the 1950s and 60s – is nearing the end of its safe-operating lifetime and must be replaced. That combined with shifting supply and demand has left TSOs with staggering build out costs including €102 billion by 2030 in Germany to $2.4 trillion by 2050 in the US.

Just as costs of new infrastructure are mounting for TSOs, the regulators that govern their capital deployment are increasingly scrutinizing their spending. As the global price of a kilowatt-hour (kWh) has climbed over the last years for myriad reasons, and end customers faced steeper electricity bills, regulators across grid systems from America to Australia have lowered the rate of regulated returns TSOs get on capital spending (CAPEX). Inflationary pressures that began with the pandemic are adding to the growing storm of higher costs and lower regulated returns.

These are key years for utilities to make structural grid upgrades that will enable renewable integration and ensure reliable power supply. Yet the nature of utility regulation, with rates of return set at the start of multi-year regulation periods in many markets, will keep TSOs’ return on equity low for years, even as cost of capital (after years of record lows) started rising steeply in 2022. With lower regulated returns, many TSOs argue they’ll have less capital available to make needed investments in time. Some analysts have echoed their sentiments, cautioning that “regulatory approvals for discretionary projects could become tougher to achieve, which would impact short- and medium-term earnings.”

Consolidated Edison (ConEd) in New York already wrestled with this earlier in 2022. With electricity bills for New York City residents skyrocketing, the New York State Attorney General requested the utility explain month-to-month price jumps and demanded that ConEd “communicate rate increases early on so New Yorkers know what to expect when they open their energy bill.”

Elsewhere in the United States, utilities like Arizona Public Service or Pacific Gas & Electric have asked courts to reverse regulator actions and increase their rates of return. Thus far, however, their appeals have been denied.

How can TSOs keep pace with the energy transition while operating in an increasingly conservative regulatory climate? It begins with using smart technologies, often referred to as non-wire alternatives, like dynamic line rating, phase shifters, and battery-based storage systems. These can help defray huge CAPEX projects, hedge against demand forecasting uncertainty, or move spending to the operating expense (OPEX) column of the balance sheet. 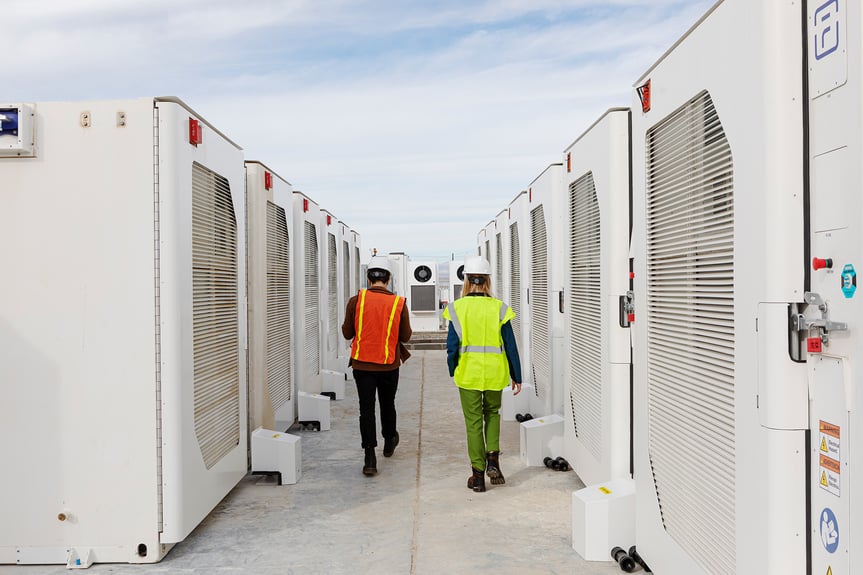 How SATA Is Keeping TSOs’ Grid Planning on Track

There is no question about the necessity of new grid infrastructure in the coming decades, both for the safe operation of grids and for transporting the increasing amounts of renewable energy throughout the grid. But to ensure end users have cost-efficient, reliable, renewable power, TSOs must maximize the use and return-on-investment for any capital they deploy.

SATA has the flexibility to serve multiple use cases, including multi-use assets across services traditionally associated with the regulated business of TSOs (e.g. system operation or ancillary services such as black start or voltage control) and market-based uses (e.g. energy arbitrage and ancillary services). And because energy storage is faster and less risky to deploy than building new poles, lines, and substations, consumers profit faster from the upgrades and necessary infrastructure is deployed in a timely manner.

Germany’s Grid-Booster for instance – three SATA projects totaling 450 MW being deployed across the country – will save money for ratepayers as early as 2024 by reducing the redispatch of power on both sides of the congested North-South transmission corridor, allowing generation to run more efficiently and reducing curtailment of renewable energy. While Germany’s TSOs are also building new transmission lines to transport more power from North to South, these are expected to take more than a decade, during which the SATA assets will already be generating value for German consumers.

Traditional grid infrastructure is built in big blocks; making granular additions to them is not easy. Thus, as TSOs survey the decades ahead, they have historically modeled high-load-growth scenarios and built to accommodate them. While costly, the alternative – failing to meet customer demand – would be exponentially more so.

With added pressure to keep ratepayer costs low by avoiding superfluous expenses, TSOs are thinking even more carefully about whether their grid assets will be fully utilized should they build them.

Against this backdrop, battery-based energy storage systems are opening new pathways for TSOs to manage risk of underutilization that don’t require huge capital outlays. Because this type of storage is modular, TSOs can build it out incrementally, optimizing for both size and uncertainty, or move it from one location to another. The reduced capital expense compared to conventional transmission infrastructure built for the same purpose is increasingly appealing to regulators.

Moreover, making incremental investments in storage to meet more certain near-term demand versus one large investment in traditional infrastructure reduces investment uncertainty even if high-load-growth projections become reality. In these cases, a new transmission line can be built once a utilization threshold is reached. Before that point, storage can defer the earlier build of the transmission line, moving the start of the cost depreciation of the line into the future. 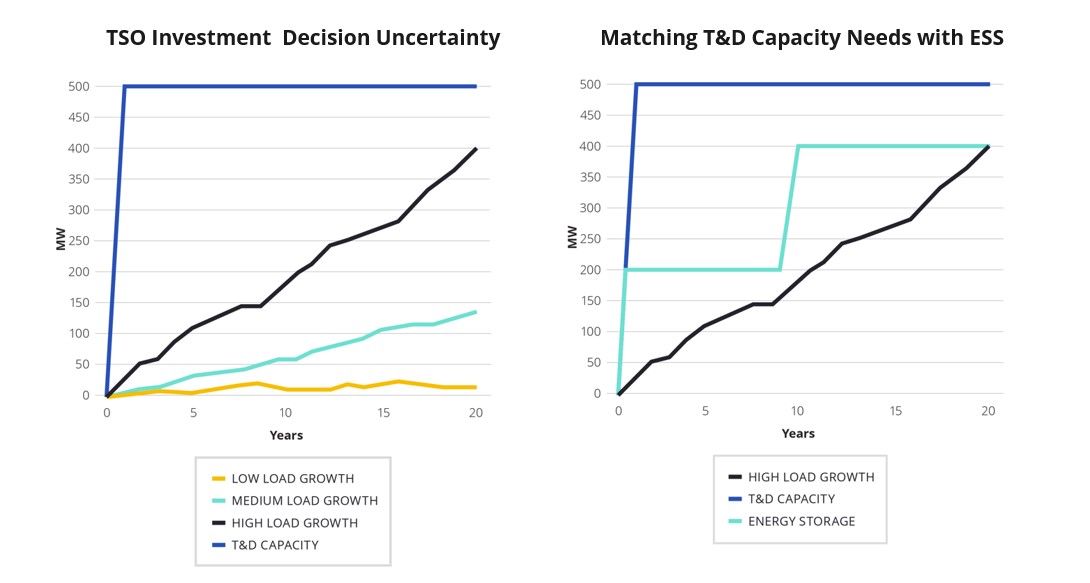 In the scenario above, the utility still builds out roughly the same transfer capacity as it would have had it installed 100 MW of grid infrastructure. But it does so over the course of 20 years with battery storage rather than all at once in year one, freeing up more capital to use for addressing other pressing grid infrastructure needs.

OPEX or CAPEX: The Versatility of Battery-Based Storage Ownership Models

Where TSOs are facing extreme price sensitivity with regulators and CAPEX approval is scarce, battery storage’s ability to be procured through a service contract – depending on the regulatory context – offers another key opportunity.

Traditional grid reinforcement consists of large capital outflows in year one, after which the grid asset becomes part of the TSO’s asset base and depreciates. TSOs recover the depreciating value of the asset plus the regulated return through increased rates until the asset is fully depreciated.

SATA, on the other hand, can be utilized by TSOs while a third party retains ownership. This allows TSOs to treat service and operations costs as OPEX while reaping the financial benefits of their SATA system.

Even with increasing governmental and commercial support for renewable integration, TSOs will struggle to find the necessary infrastructural capital for years to come. As they look to deliver on clean energy goals while providing reliable power, SATA together with traditional T&D assets will help deliver a more effective cost solution.

Can SATA Overcome the Regulatory Hurdles?

In implementing SATA solutions, TSOs are regularly breaking new ground, and may face various hurdles in grid planning processes, regulation, and incentivization frameworks. But the current regulatory framework in which most TSOs operate does not recognize storage as a transmission asset, limiting the full technical and commercial potential of SATA solutions. In our next and final piece in the series, we’ll take a close look at how TSOs can navigate this, integrating new technology under old policies and processes.