In many power systems around the world, a major transformation is underway. Proportions of synchronous generation, generally from coal and gas-fired power plants, are rapidly reducing. At the same time, the share of inverter-based resources, such as wind, solar and battery-based energy storage in the energy mix is increasing. Transmission System Operators (TSOs) must soon confront unparalleled challenges to maintain power system stability.

In some regions, the change is approaching at gale-force speed, and requires TSOs to act now, while others are set to face these challenges in the coming years. For example, power systems in Australia and Great Britain must rapidly adapt to prepare for the change. The Australian Energy Market Operator (AEMO) foresees it may need to operate in conditions of 100% instantaneous inverter-based resources as early as 2025.[1] This follows in the footsteps of National Grid ESO, the system operator in Great Britain, which also aims to support instances of ‘zero carbon generation’ by 2025.[2] Battery-based energy storage with advanced capabilities is emerging as a crucial tool to underpin a safe, reliable, and cost-effective transition.

This is the second deep dive in our series on the five Challenges TSOs will face in 2022 and beyond. If you’re new to the series, read our overview post which summarizes each challenge.

Grid stability, in some markets referred to as system security, relates to a power system’s ability to both remain stable in normal conditions, and to stabilize quickly when unexpected events occur, such as tripping of generators or large loads, or transmission line faults. This differs from reliability, which is the power system’s ability to deliver electricity to where it’s needed, when it’s needed.

Synchronous generators, like coal and gas plants, rotate at the frequency of the grid and provide stability services like inertia and system strength as a by-product of their operations. Asynchronous resources (i.e., inverter-based resources) like wind, solar and battery-based energy storage are connected to the grid with power electronics which do not inherently provide inertia and system strength (although have the potential to do so as we discuss in the next section). As aging and inflexible coal-fired power plants retire and are replaced by low-cost renewables and energy storage, TSOs are increasingly looking to alternative methods to ensure the grid remains stable.

Australia and Great Britain: The First Grids to Face Up to The Challenge

In most regions where inverter-based resource penetrations are increasing, declining grid stability is a challenge looming on the horizon. However, certain network characteristics mean that some grids are facing these issues sooner than others. Grids in Australia and Great Britain are relatively less interconnected, making them more vulnerable to the effects of disturbances.

While both markets face common system stability issues, they differ in market structure and frameworks available to rapidly implement solutions.

At the end of 2021, the United Kingdom unveiled a plan to fully decarbonize its power system by 2035.[4] In order to achieve this, more than 80% of Great Britain´s electricity generation will need to be from renewable resources between 2025 and 2030.[5] In 2020, Great Britain´s share of renewable electricity generation was 50% and the estimated annual average national inertial level provided by synchronous generation available in the energy market was 197 gigawatt seconds (GW.s). It is forecasted that the average inertia provided by the market may decline to 119 GW.s in 2025, driven by the reduction of conventional power generation.[6]

Great Britain´s transmission system operator, National Grid Electricity System Operator Limited (NGESO), has incorporated in their Network Development Roadmap, the Stability Pathfinder Program.[7] The program’s objective is to trial a long-term tender approach for the procurement of inertia, short circuit level and dynamic voltage services. With this, NGESO aims to establish the foundations for long- and short-term stability markets to procure stability services, which have been traditionally provided as a by-product during the dispatch of synchronous generation in the balancing market. This “learning by doing” approach has been proactive and consultative with industry. It has accelerated progress to make use of all technologies available, including advanced applications of energy storage.

On the other side of the globe, Australia’s main electricity grid, the National Electricity Market (NEM), faces the perfect storm of system stability threats: a long, stringy, and sparsely interconnected network, the rapid build of large-scale renewables far from load centres and the looming retirements of aging coal plants.

Australia also has the highest uptake of rooftop solar globally, with around 30% of homes with rooftop PV.[9] In its 2022 Draft Integrated System Plan, AEMO stated that industry consensus now considers the most rapid Step Change scenario to be the most likely future scenario, meaning the NEM could operate without coal by 2043, and 100% instantaneous renewable penetration could occur 36% of the time by 2040, and 65% by 2050.[10] (See Figure 2)

This brings forth the challenge of how to prepare the power system for such a rapid change. In its Engineering the NEM Framework, AEMO has identified that “transitioning the system to operational conditions expected to emerge in the next 10 years will require the power system to be intentionally engineered for a step change in capability”. 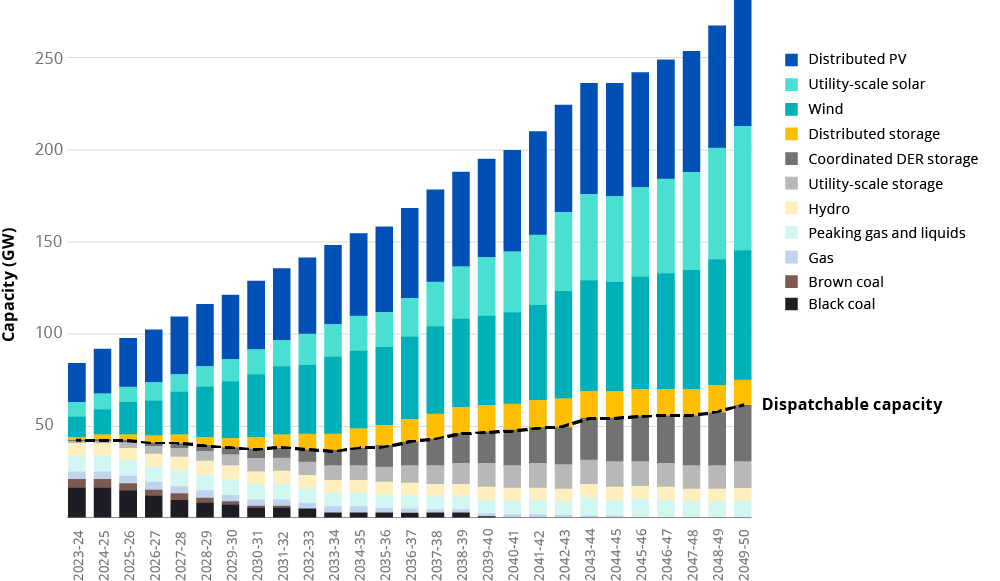 Compared to Great Britain, the fragmented regulatory structure in Australia’s NEM makes it challenging to run a program like the Stability Pathfinder. Currently, AEMO identifies emerging gaps in inertia or system strength and declares a gap, which in turn triggers a time-consuming procurement process led by the applicable regional Network Service Provider.

New rules will soon allow Network Service Providers to proactively procure system strength in certain zones where many renewable generators will be built.[11] The change also broadens the definition of system strength from being solely focused on fault current provision, to supporting a stronger voltage waveform. While uncertainties remain, this could help include energy storage with grid forming capabilities as well as other approaches like inverter re-tuning.

However, unlike a more holistic, services-led procurement program like the Stability Pathfinder, the NEM’s approach may not adequately consider technologies for all the additional benefits they bring, and it may not be agile enough for a rapidly transitioning power system. AEMO has identified this in their Engineering the NEM Framework as an urgent requirement for action and encourages key decision makers to align on priorities, timing, and approach for transition efforts beyond the current work in progress.

Synchronous condensers are traditional method to support grid stability. They have been used in South Australia to reduce the need for AEMO to call on gas generators to manage periods of low system strength. But a downside of such equipment is that it has limited functionality aside from providing these services, can face lengthy manufacturing and deployment times and require frequent maintenance. Inverter tuning is also another method to help reduce the likelihood of voltage oscillations, which can arise in areas of low system strength.

Battery-based energy storage system incorporating grid forming inverters with virtual synchronous machine (VSM) based controls is an emerging solution to help provide advanced grid stabilising features such as inertial response, instantaneous response to change in grid voltage and frequency, etc. to help TSOs maintain system strength. While inverter-based resources don’t traditionally provide this capability, demonstrations of new applications in the broader power system are underway. Advanced inverters can inherently respond to changes in frequency and voltage, and parameters can be tuned to an appropriate response. Unlike other options, a major benefit of storage is that it can provide multiple services from the same asset to stack revenue streams and can change its use with shifting market or power system needs. Energy storage, in both grid forming and grid following modes, is highly controllable, adaptable and can be rapidly scaled and deployed, compared to traditional resources. Bidding software applications may also have a role to play to help storage optimise revenue and deliver the right grid services at the right times, in an ever-growing pool of market services.

The pace of the transition means that challenges are coming soon to a grid near you. And for most, this is uncharted territory. Even in strongly interconnected power systems, localized high concentrations of inverter-based resources can cause issues. Battery-based energy storage is rapidly emerging as a flexible tool to help manage grid stability, especially as advanced capabilities are demonstrated in the broader power system. TSOs have a unique window of opportunity to observe what other regions are tackling and assess whether existing regulatory mechanisms are up to scratch. This way, they will be ready to consider all the tools at their disposal, to navigate the approaching stability storm.